A Performance by Hoobastank Caps off a Day of Skateboarding 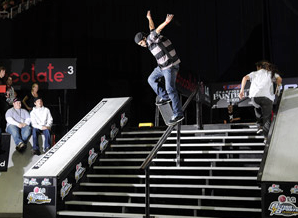 The people of Seattle got a nice reprieve from thoughts of the sorry state of the global economy and the upcoming election this weekend, in the form of three days of the best action sports in the world. The LG Action Sports World Championships came to a close on Sunday with a day full of skateboarding.

The amateur skaters started things off on the Vert ramp. Eighteen athletes ranging in ages from 6 to 20 took to the same monstrous 14-foot ramp the pros skated. Sixteen-year-old Sam Beckett took top honors in the competition.

Then things moved over to the street course, which had been completely revamped overnight. Three separate sections were set up for the jam sessions, which would qualify eight of the sixteen skaters to the final. Jereme Rodgers came out of the hectic jam session as th e number one qualifier, in a field that was split evenly between Brazilians and Americans.

But before a street champion could be determined, the Vert Ramp was once again the focus. Pierre Luc Gagnon was looking to defend his 2007 title, and cap off his winning season wi 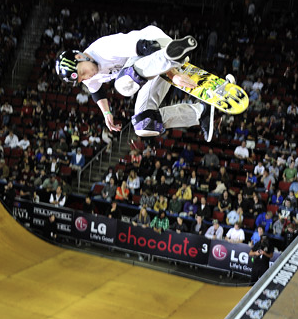 th one more victory. He did just that in his very first run, posting a 92.50, but then upped the technicality in his final run to earn a 94.50, the highest score of the day. Read the full Pro Vert story here.

The final action went down back on the street course. In the prelims, only two of the three course sections had been skated, but for the finals, the contest focused on the big gun—a 12-stair handrail. Even the top skaters expressed some apprehension about skating it, but when the clock started ticking, no one held back. The top eight skaters were all nailing tricks down the stairs, rail and hubba ledges, but it was Paul Rodriguez who skated the strongest to win $30,000. For all the info on the skateboard street final, check out the whole story.

After three days of Inline, BMX and Skateboard action, as well as performances by The Game, Pennywise and MXPX, Hoobastank closed the show with their hit song, “The Reason.” Be sure to check out coverage of the LG Action Sports World Championships on upcoming shows on CBS and FuelTV.