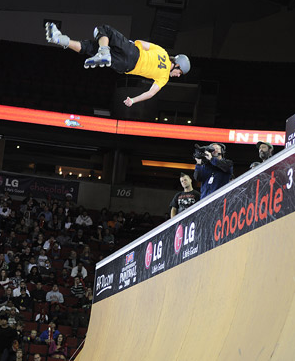 Outside of the Key Arena the Seattle rained poured down, and the ghouls and goblins came out, but inside the arena, LG Action Sports World Championships kicked off with vert and street action. The crew worked hard all week to make sure the vert ramp was perfect for Friday’s Inline Vert Final and even brought in a skateboarding bull dog to test out the street course before the BMX and Inline street prelims went down.

By the time the doors opened at 6pm for session one, the inline street finals line up had already been decided by a prelim earlier that day. Inline street is the only event in the LG Action Sports Championships with a separate women’s division, and the lovely ladies of inline held their own riding right alongside the men. Fallon Heffernan topped the women’s field and will join three other ladies in the final.

The men’s inline prelims were a bit different than in years past, taking on a jam format rather than best of two runs. The results felt the difference, with some new names rolling into the finals, and some usual suspects, such as Chris Haffey, not earning a bid into Saturday’s event. The top 12 men advanced and will return to the street course to determine the winners during Saturday’s session three. 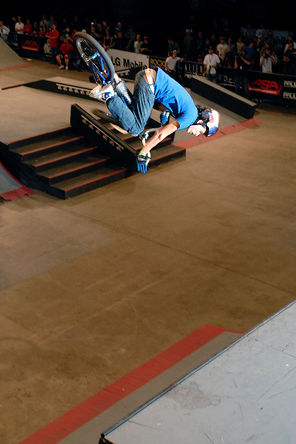 When the doors opened to the waiting crowd, many of whom donned costumes in the spirit of the holiday, the street course had been taken over by BMXers, warming up for their prelim later the night. The real action was on the Vert Ramp though, where two familiar faces of inline were missing: Eito and Takeshi Yasutoko. But the high flying Japanese brother’s absence meant one thing was for sure: The LG Action Sports World Championships would see a new Inline Vert champion. Odds were good for the top-ranked American Marc Englehart, but two falls early on in his runs ended his chance at standing atop the podium. Taking the gold was Marco De Santi, back for his first competition in nearly three years after a stint in Cirque du Soleil prevented him from competing.

As soon as the awards were given out, attention turned back to the street course, where BMX’s best were vying for their spot in Saturday’s finals. Only 8 riders made it through, with Daniel Dhers topping the pack by almost 3 full points. Getting into the final was no easy feat though. There was a three-way tie for second place, and the 8th place qualifying spot was also decided by a tie-breaking second run score. Last year’s champion Morgan Wade squeaked past Koji Kraft to advance to the final. Some highlights from the non-qualifiers included Zach Warden’s perfect bike flip (after he fell and broke a tooth on his first attempt) and Steve McCann’s use of th e Vert ramp to do a big transfer in his run.

Finally the lights went down and Grammy Nominated rapper The Game took the stage. The street course was again filled with athletes and their guests, and the stands were packed with fans who chanted and sang along with the hip hop anthems. The energetic set was a perfect conclusion to the first day of the LG Action Sports World Championships.

The LG Action Sports World Championships continue all weekend long with skateboard, BMX and Inline competitions, as well as musical performances by Pennywise, MXPX and Hoobastank.