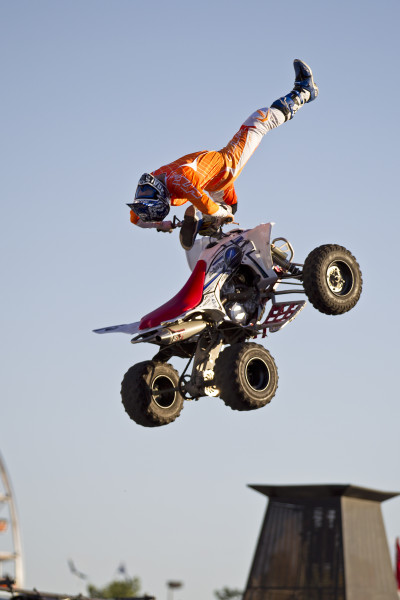 Considered one of the world’s best quad riders, Elkins performs flips and tricks on the same ramps as the FMX pros. This will be the first time ever that a quad rider will compete against freestyle motocross riders in a competition.

More than 40 superstars of action sports are competing at St. Pete Action Sports in an epic battle for ramp supremacy.

Among the BMX pros competing: Ryan Nyquist, the second-most decorated BMX athlete in X Games history (with 16 career medals), Colton Satterfield (who recently made history by becoming the first BMX’er to nail a double flair on the Big Air ramp at the Austin X Games), James Foster of Nitro Circus fame and BMX stars like Scotty Cranmer, Morgan Wade and Nicholi Rogatkin.

Along with Cody Elkins, the field of FMX daredevils revving up the intensity includes 5-time X Games medalist and 2-time World Champion, Taka Higashino, as well as FMX legends Adam Jones, Mike Mason, Todd Potter, Brody Wilson and others. Their backflips and whips will leave spectators on the edge of their seats.

Among the intense competitions are Big Air Triples, which features BMX riders doing three consecutive jumps on a 200-foot-long by 32-foot-high ramp, skateboarding on the actual half-pipe from the X Games and a head-to-head FMX contest on ramps designed by Keith Sayers.

From Bill Edwards Presents and ASA Entertainment, this exciting two-day clash of the titans will be like nothing the Tampa Bay area has seen before.

“We are thrilled to bring this event to St. Pete,” said Bill Edwards. “Al Lang Stadium is now a vibrant downtown event center, and St. Pete Action Sports is a tremendous addition to the calendar.”

Located in downtown St. Petersburg, Fla., the historic, waterfront Al Lang Stadium has been a vital part of the community since it was built in 1947. Originally a baseball park, the venue is named in honor of Al Lang, a former mayor of St. Petersburg who was instrumental in bringing professional baseball to the city in the early twentieth century.