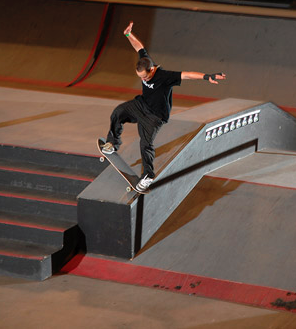 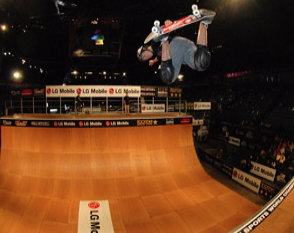 Josh Stafford showed that the future of skateboard vert is very bright. 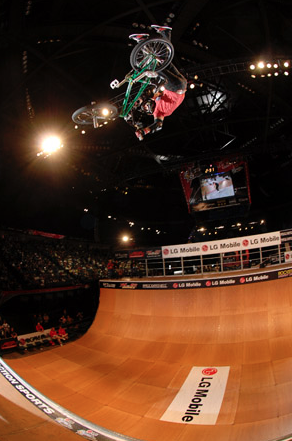 Jamie Bestwick blasted the 14-foot-tall vert ramp and scored another win in Dallas.

The final day of the LG Action Sports Championships was short and sweet with the BMX Vert Finals, Skate Street Finals, and Amateur skateboard competition, topped off with a performance by Cartel.

The day started with the young guns in the Amateur Skate Vert competition. Most of the competitors were well under 18, a few barely into the double digits. Their small statures made the fourteen-foot ramp look even bigger than usual. The skaters showed no fear though, blasting airs and doing lip tricks like old pros. Sixteen-year-old Josh Stafford blew away the competition to take the win, while 13-year-old Dylan Taylor took second and 10-year-old Mitchie Brusco brought home a bronze.

Next up were the pro street skaters, where the Brazilian contingent continued its domination. Rodolfo Ramos linked trick after trick after trick, making full use of the hubbas and flat bar to score an 87.75 for his first run, which would hold throughout the competition. Another Brazilian, Carlos de Andrade, skated hard in practice and it paid off with a silver medal, Greg Lutzka rounded out the top three after adding several flip-in tricks to his run.

Action moved back to the vert ramp for the BMX Vert Finals. Thirteen riders took two runs each — the larger field was due to no pre qualifier—but the day was all about Jamie Bestwick. Big air and big tricks earned him his 4th Action Sports Championship title. In second Simon Tabron nailed a big 900, and Chad Kagy scored third, despite a crash that ended his day early.

Finally, rock and roll played a fitting conclusion to a big weekend of action sports as Cartel performed. Through out the weekend some new champions were crowned and old titles defended in front of a packed stadium. By far the biggest LG Action Sports Championships yet, 2007 will go down in history for its superb riding and huge musical performances. See you next year!