Qualifiers and Kanye take over Dallas

The preliminary day of competition at the LG Action Sports Championships saw fans steadily pouring into the Reunion Arena all evening long, and by the time Kanye West took the stage around ten, the stands were packed with excited Texans. But the smart ones got there early for some of the most exciting prelims around. The best of the best were gathered in Dallas to vie for a spot in the weekend’s finals.

The day started off early with Inline Street Prelims. The only sport with a separate female division of the weekend, inline street brought in almost thirty of the best skaters in the world. In the men’s competition, Erik Bailey of Boise, ID blew away the rest of the field by two full points to qualify in first. For the women an international top three was led by Brazil’s Fabiola da Silva. 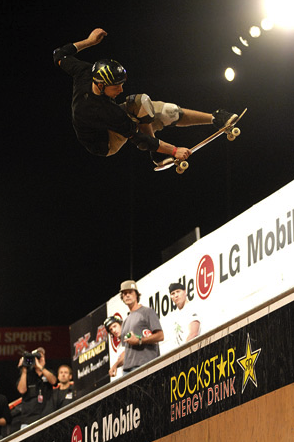 Pierre Luc Gagnon is on top of skateboard vert, just squeaking ahead of Andy Macdonald in a tie-breaker

Once the doors opened to the public at six, the action remained on the street course for BMX prelims. The field was divided into two heats of ten, both extremely competitve. Riders were scored in a two-run, best run counts format. In the first heat, 17-year-old Garrett Reynolds threw down a solid score of 87 in his first run. Second run he proved it was no fluke, matching his first run score. His 87 would hold through the first heat as the high score. When the next ten riders took to the course, Reynolds’s score would prove tough to beat, that is, until Daniel Dhers dropped in. With his smooth and powerful style, Dhers linked together banger after banger to post an 88, and finish the day qualified in first. Local boy Morgan Wade qualified in third. His runs were so powerful, that even a fall on a giant gap to rail was barely apparent in his score. 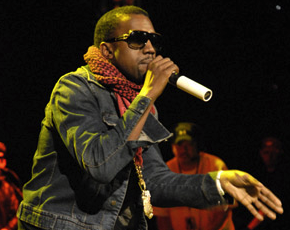 While the street skaters took over the park course for practice, the competition moved over to the vert ramp for the skate vert prelims. The competition was fierce, and first and second place skaters, Pierre-Luc Gagnon and Andy Macdonald, actually tied for the best score of the day. Each skater’s second run score was considered to determine PLG had qualified in first. Perhaps a sign of things to come, the youngest skater in the vert competition, sixteen-year-old Alex Perelson finished the day in third.

Kanye West was a fitting conclusion to the day as literally 75% of the athletes had requested his song, Stronger, to play as they took their runs. He did not disappoint the packed in crowd, playing hits from both of his multi-platinum albums. Friday’s action didn’t conclude until after midnight, but that was just the beginning: The action will continue all weekend long with more action sports competition and musical performances from Blake Lewis, Ludacris and Cartel.