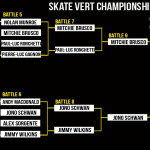 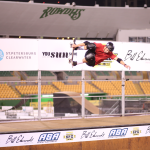 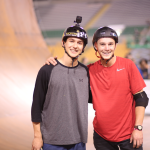 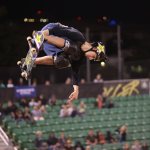 After 9 Rounds, Mitchie Brusco edges out Jimmy Wilkins to win final night of competition in St. Petersburg in a unique contest format

St. Petersburg, Fla. (Dec. 6, 2015) – Mitchie Brusco took the win on the final night of the 2015 St. Pete Action Sports in the Skate Vert competition against a stacked group of skaters. The contest included six rounds of jam sessions leading into the semifinals where Mitchie Brusco faced Paul-Luc Ronchetti and Jono Shwan faced Jimmy Wilkins. Shwan and Brusco advanced to the finals while Ronchetti and Wilkins tied for third.

Brusco secured the win by landing a combination of technical tricks including a several 540 variations, two flip tricks and a melon 720 in his 7 wall run.

“I loved the format of this event,” said Brusco, who secured his first career contest victory in skate vert. “The jam session for the first two rounds got the crowd and skaters really into it and then the head-to-head battles in the semis and finals made the skaters pull their best runs. The wind made it a bit tricky, but I just went out and did the tricks I’ve been working on back home.” 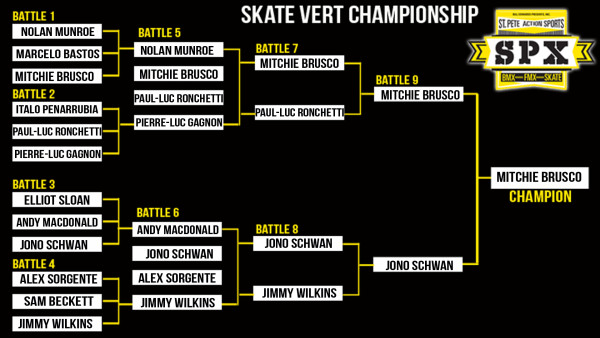