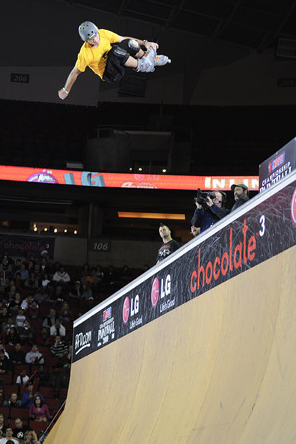 Champions have been crowned in BMX Street, BMX Vert and inline street (men’s and women’s). Day two of the LG Action Sports World Championships is officially a wrap. Athletes came from across the globe to vie for a huge prize purse, and the chance to be an LG World Champion.

In BMX Street, 2006 champion Daniel Dhers was looking to fend off 2007 champion Morgan Wade to reclaim his title. With a victory lap that scored two points higher than his first highest scoring run, he did just that. Dhers pulled of a one-handed 720 can-can along with every flair variation under the sun to take home the top score and the title 2008 LG World Champion.

On the Vert Ramp, things started off with the skateboarders vying for one of eight places in in Sunday’s finals. Skaters got five chances to post the highest score possible in 10 tricks (or walls), and Pierre Luc Gagnon, who’s been on a tear all season, did just that, throwing down a 93 in his third run. For the whole story on the Skateboard Vert Prelims, check out the full coverage.

Next up was an energetic performance by punk band MXPX, closing out session one.

When the doors reopened to the waiting Seattle crowd, the top four ladies of inline street were waiting to put on a show. It was really a competition between Jenna Downing and Fallon Heffernan for the gold, but Jenna was on fire, and topped the rest of the field by nearly 10 points. Fabiola da Silva took home her second bronze medal of the weekend after earning third against the guys in Friday’s Vert competition.

Things moved back over to the vert ramp for the BMX Vert finals, where Jamie Bestwick took his fifth title out of the six years the event’s been held. Chad Kagy and Simon Tabron rounded out the podium. Check out the full story about BMX Vert here.

The last competition of the day was Men’s Inline Street, which took on a whole new format for the 2008 event. The field had already been narrowed to 12, and two heats of six rode in a jam session format trying to nail the best trick. Out of the 12, the six top tricks got another go at it to determine the final standings. Frankie Morales took top honors at the event.

Finally, legendary punk band Pennywise took the stage and rocked day two of the LG Action Sports World Championships to a close. The event continues Sunday with the official “skateboard” day. Starting with Amateur Skateboard Vert at 1 pm, then pro Skate Vert at 3:00 and finally the skateboard street competition at 4:00, where skaters such as Paul Rodriguez, Greg Lutzka and last year’s champion Rodolfo Ramos, will face off for the title of LG World Champion.