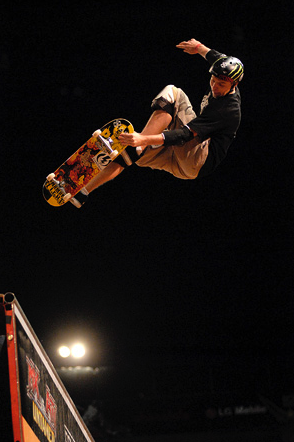 It’s official: Pierre-Luc Gagnon has swept all three events on the 2007 Action Sports World Tour, with big wins in Phoenix, San Diego, and here in Dallas at the LG Action Sports Championships. For good measure, he also found his way to the podium in every other contest he skated this year.

“I’m feeling amazing: I really needed a year like this to get my confidence back after last year’s injury,” says Gagnon. He pushed himself to get 720s and new tricks into every run this year, and says he’ll spend the rest of the year working on new moves for next year. “It gets boring when you don’t learn anything. That’s what makes it fun: To progress, learn new things, and push your limits.”

Gagnon is stoked on his big win – he was calculating the percentage of his paycheck he could afford to spend picking up tonight’s celebration party tab even as the check was being cut – but says he’s equally stoked to see some new faces on the ramp and on the podium this year: 16 year-old rookie Alex Perelson scored his biggest finish of the season here in Dallas, coming in 2nd after a huge run with massive airs, a 720 tailgrab, and the confidence of a seasoned pro. Andy Macdonald, the veteran pro who has mentored Perelson over the last few years, ended up behind him in 3rd place.

“It’s awesome that there’s this whole new generation on the vert ramp,” says Gagnon. “Some of the guys are getting a little older and maybe planning on retiring in a few years soon so this next generation is just in time to help keep everything alive and keep it good. It’s amazing to see  Alex Perelson, Adam Taylor, and Jean Postec climbing up the way they are and to see that so many ams will be competing in the vert contest tomorrow. Vert skating is alive and well.”

Don’t worry: Gagnon’s not even close to handing over the reins.

“I definitely want to learn another 720 variation before next year so I can have two different 720s in my runs next year and I’m going to be working all winter on my… No, wait. I shouldn’t be telling you this! I have to keep some surprises. Just wait until next year, because I’m just getting started.”