Texas’s own Morgan Wade took the gold belt buckle (fitting for Texas!) at the LG Action Sports World Championships BMX Street finals, but it wasn’t a run away. The crowd roared extra loud as Morgan took the course for his second run sitting in 2nd place. He had already added one big trick to his prelims run, a huge transfer from the box to bank, clearing some 25 feet. But as in prelims, Morgan had stumbled on his bank to rail transfer and had room to improve. 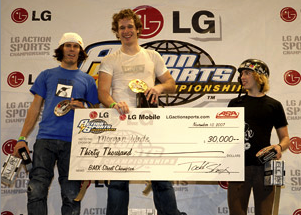 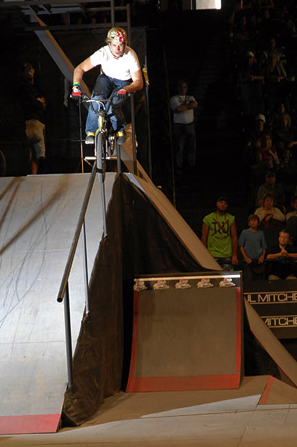 In the first run, last year’s Champion and clear favorite Daniel Dhers had posted the high score of 89.25 with a solid run of flair variations, tailwhips, and spins including his signature 720 flat spin. To no one’s surprise it looked like he would be tough to beat. Then Morgan dropped in again.

“I figured if I stayed on my bike I would have a pretty good chance,” he said, “so I basically tried to pull everything. I figured if I got the rail I’d be good to go, and I did. It always feel amazing to actually stick everything in a run and come out the other side still rolling.”

When the scores came down, Morgan had posted a 91.50, the highest score of the competition so far. But since he had qualified in third, he had to sit and watch the first two seeds take their runs before it would be official. Second place qualifier Garrett Reynolds rode hard and stuck everything, bettering his first run score. But an 87.25 was not enough to best Daniel or Morgan.

The real challenger though, was Dhers, who added a few tricks on top of what he threw down in the first run — a tailwhip in place of a wall ride on the sub, a turndown to his corked 720 and a front flip over the spine. The judges certainly had their work cut out, since they were judging two very different but equally impressive runs. And no one was sure who had taken it until the scores were posted.

“I knew it was going to be close. I didn’t know for sure until the score came out. I was crossing my fingers,” Morgan said.

Daniel’s score did go up, but just .75 points to a 90.00, making Morgan Wade the 2007 LG Action Sports BMX Street World Champion in front of a hometown crowd.

“I could definitely feel that everyone was excited because I was from around here,” Morgan said. “It seemed to get a little louder when I was riding. It fueled the fire a little bit. It felt great.”